What began in the funny pages in 1950 has developed into an enduring classic. Whether you're a fussbudget like Lucy, philosopher like Linus, Flying Ace like Snoopy, or a lovable loser like Charlie Brown, there is something to touch your heart or make you laugh in Peanuts. 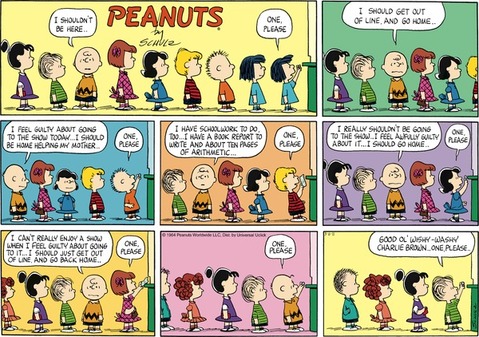 Born in Minneapolis, Minn., on Nov. 26, 1922, Charles M. Schulz was the only child of Dena and Carl Schulz. From birth, comics played an important role in Schulz's life. At just two days old, an uncle nicknamed him 'Sparky' after the horse Spark Plug from the Barney Google comic strip, and throughout his youth he and his father shared a Sunday morning ritual reading the funnies. Schulz always knew he wanted to be a cartoonist and was very proud when Ripley's newspaper feature, Believe It or Not, published his drawing of the family dog in 1937. The Schulz family moved to Needles, Calif., in the summer of 1929, when Sparky was 6 years old; they only stayed there for about a year before returning to Minnesota.

Schulz put his artistic ambitions on hold during World War II while serving as a machine-gun squad leader, though he regularly sketched episodes of daily army life in his sketchbook. Following his discharge in 1945, Schulz returned to St. Paul, Minn., to pursue a cartooning career. Between 1947 and 1950, he drew a weekly comic panel for the St. Paul Pioneer Press and also sold 17 comic gags to The Saturday Evening Post. After many rejection slips, Schulz finally realized his dream of creating a nationally syndicated daily comic strip when Peanuts debuted in seven newspapers on Oct. 2, 1950. By 1965, Schulz was twice honored with the Reuben Award by the National Cartoonists Society for his talents, and Peanuts was an international success.

Schulz once described his thoughts on the art of cartooning as this: "Drawing cartoons is a great way to share your ideas. A cartoonist is no different from any other type of artist - he or she wants to express him/herself. There is a joy in playing the piano or painting a wonderful watercolor. There is also a joy in communicating a thought, whether serious or funny, to another person." (1996)

When Schulz announced his retirement for health reasons in December 1999, Peanuts was in more than 2,600 newspapers worldwide; he died shortly thereafter, on Saturday, Feb. 12, 2000, just hours before the final Peanuts Sunday strip appeared in newspapers.

Meet the Cast of Peanuts

Charlie Brown “Good ol’ Charlie Brown” is the lovable loser in the zigzag T-shirt—the kid who never gives up (even though he almost never wins). He manages the world’s worst baseball team, yet shows up for every game. He can’t muster the courage to talk to the Little Red-Haired Girl, yet keeps hoping. Even though he gets grief from his friends, his kite-eating tree, even his own dog, Charlie Brown remains the stalwart hero.

Snoopy The wildly imaginative, supremely confident, world-famous beagle is a canine master of disguise. As Joe Cool, he’s aloof, unflappable, above the fray, the hip dog we’d all like to be. As the World War I Flying Ace, he engages in aerial combat with the notorious Red Baron. While pondering life from the top of his doghouse, he writes the great American novel

Lucy Known around the neighborhood (and by her little brother, Linus) for being crabby and bossy, Lucy can often be found dispensing advice from her 5-cent psychiatrist’s booth, yanking away Linus’ security blanket or humiliating Charlie Brown. Lucy’s only weakness? Her unrequited love for the piano-playing Schroeder.

Linus The benevolent, blanket-clutching philosopher always has a kind word for everybody, even his bossy older sister, Lucy. While he’s often the voice of reason in the neighborhood, Linus also believes firmly in the Great Pumpkin, and he suffers more than most when people (or pumpkins) let him down.

Sally Charlie Brown’s little sister believes the world owes her an explanation. Why does she have to go to school? Why doesn’t Linus, her Sweet Babboo, love her? And what’s the capital of Venezuela? Sally is always on the hunt for answers—and when she doesn’t get them, she comes up with a whole new philosophy: “Who cares?”

Schroeder This mini musical genius is rarely separated from his toy piano or his idol, Beethoven—except when he’s calling a game as the reliable catcher on Charlie Brown’s baseball team. The rest of his time is spent fending off unwanted advances from the bane of his existence: Lucy.

PigPen Happily traveling in his own private dust storm, Pigpen is completely comfortable in his own (dust-streaked) skin. Despite his outward appearance, he always carries himself with dignity, knowing full well that he has affixed to him the “dust of countless ages.”

Peppermint Patty A fearless born leader and a natural athlete, Peppermint Patty is up to any challenge-except studying. She never met a school day she didn’t hate. But this tough girl has a soft side, too: She’s hopelessly in love with her pal Charlie “Chuck” Brown who has no idea. For Peppermint Patty, sports are easy; it’s life that’s hard.

Woodstock This fluttering, sometimes sputtering, little yellow bird is Snoopy’s sidekick, whether it’s as faithful mechanic to the World War I Flying Ace, stalwart secretary to the Head Beagle or root beer drinking buddy. Chirping in a language only Snoopy understands, Woodstock and his feathered friends are never far from Snoopy’s doghouse.

Few of us are immune to the Peanuts spell.

With its quiet debut in seven newspapers in late 1950, Charles Schulz' simply drawn cartoon about a gang of innocent-looking kids and their dog began a revolution on newspaper comics pages. Among all the dashing superheroes and cartoon clowns of the time, Peanuts not only looked different, but it felt different. The art is spare, even childlike, but the Peanuts kids speak adult language and are full of adult emotions. Schulz' genius for exploring these feelings while sharing a good laugh drew readers in to connect with a cartoon in ways they never had before.

And that's why Peanuts endures. Eventually read by some 355 million fans in 75 countries around the world, Peanuts is a touchstone that new generations embrace with the same love and loyalty that have earned it iconic status in American culture.

The truth is, happiness really is a warm puppy.