Magic in a Minute by Mac and Bill King

Kids love magic and now that excitement can be found in your newspaper in a fun kids' comic strip featuring easy-to-learn magic tricks and bright, cheerful illustrations.

Since 2000, world-renowned magician Mac King has been wowing audiences young and old alike with "The Mac King Comedy Magic Show" in Las Vegas. Now, along with his cousin, artist Bill King, he is teaching fans a few timeless magic tricks with his weekly Magic in a Minute comic strip. 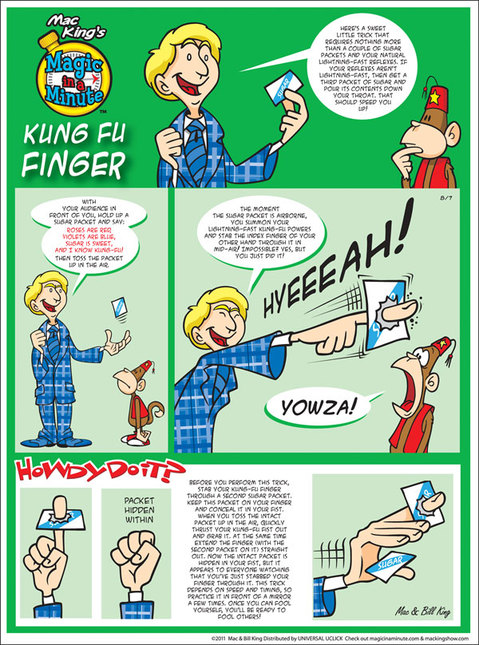 Magician and comedian Mac King puts the magic in Magic in a Minute. Superbly qualified to introduce kids to magic, he was named the 2007 funniest magician in the world at the World Magic Awards' Comedy Magician of the Year awards ceremony.

King's long-running magic show at Harrah's in Las Vegas consistently places in the top 10 favorite shows in that city. No stranger to television, he has starred in seven specials for NBC-TV and his magic book from Random House has just entered its fifth printing.

King became interested in magic at a very young age with the help of his grandfathers, who were both amateur magicians. After graduating from Macalester College in Saint Paul, Minn. with a degree in anthropology and magic, King took his show on the road, eventually headlining all the major comedy clubs in America.

Since Jan. 2000, he has been starring in the long-running Mac King Comedy Magic Show in Las Vegas. King has performed all over the world, both onstage and on television, in Spain, Japan, Australia, Denmark, Sweden, England, Argentina, Holland, Finland, Canada, Chile and Portugal. He moved to Los Angeles in 1987, where his amazing visual style of magic and offbeat, but decidedly friendly approach to comedy, eventually caught the eye of the producers of popular '80s stand-up comedy TV shows like An Evening at the Improv and Comic Strip Live.

He has the distinction of being the only performer to have appeared on all five of NBC's "World's Greatest Magic Shows." King can also be seen on the television specials "Magic Road Trip" airing on the Travel Channel, and "Lance Burton's Guerilla Magic" on Animal Planet, as well as in "The Greatest Magic Tricks In the UniverseÂ·Ever."

King met his wife Jennifer at one of his shows, where she was a volunteer from the audience. They married in Louisville, Kentucky in 1985.

Bill King is the artist half of Magic in a Minute. Cousin to Mac King, he started cartooning early in life, taught by his father Lewis and his grandfather, Bill. His grandfather drew the comic strip, "Tinker the Thinker," that ran in several newspapers back in the 40's and 50's. King was born in Chicago but was raised in Dunwoody, Ga. He graduated from The University of Mississippi in 1989 with a BFA in Graphic Design. He is an illustrator, graphic designer and toy designer specializing in children's premiums (the little toys that come in cereal boxes). He has also contributed artwork to several magazines and books.

King currently resides in Chicago with his wife Joetta and a really fat cat whose name changes daily.

Meet the Cast of Magic in a Minute

See sample PDFs of Magic in a Minute: